One of the most interesting areas of astronomical research is the hunt for extra solar planets or exoplanets.

The American Kepler space telescope was designed to hunt for exoplanets in our area of the Milky Way. It was launched on March 6, 2009. Before official observing had even started – and with only 10 days of test data – Kepler made a major discovery. Kepler detected the atmosphere of a previously known exoplanet named HAT-P-7. 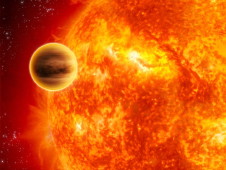 The NASA Image at the left depicts what HAT-P-7 might look like as it orbits a star located about 1,000 light years from earth. HAT-P-7 has been described as a “hot Jupiter”. It’s mass is a little bit higher than Jupiter but it is 26 times closer to its star than Jupiter is to our Sun. Because of its close proximity to its star HAT-P-7 only takes 2.2 days to complete an orbit. By comparison, it takes Jupiter almost 12 years to complete an orbit. The dayside temperature of HAT-P-7 is estimated at 4,310 degrees Fahrenheit.

You can learn more about the Kepler mission on NASA’s Kepler Overview page.

This entry was posted in Astronomy News. Bookmark the permalink.