I believe that many readers of this blog are amateur astronomers. I also believe, based on my own subjective experience, that a very small number of amateur astronomers are active on Twitter. When I ask friends and colleagues why they aren’t active on Twitter, I usually receive mumbled replies mentioning Justin Bieber or just the simple statement “I don’t do those things” (I guess in reference to Twitter and Facebook or maybe they’re also referring to Justin Bieber). In any case, if you are interested in astronomy and space exploration and you’re not on Twitter then you are really missing out.

Like the internet itself, Twitter is an amazing resource with information on every conceivable topic including astrophysics, planetary science, manned space flight, robotic space missions, etc. You can follow nobel prize winning physicists, post-doc students, governmental organizations, universities, observatories and professors. I am currently following 202 people or organizations on Twitter and I think they’re all great. Listed below is a cross section of some of the Twitter accounts I follow:

As you can see, this is a pretty varied group of individuals and organizations. However, this list just scratches the surface. As I said earlier, I follow 202 accounts on Twitter. If you’re interested in astronomy you owe it to yourself to join Twitter and start learning. Today.

Yesterday I had an amazing experience – I attended a tweetup at the Jet Propulsion Laboratory (JPL) in Pasadena, California. (A tweetup is a meeting of Twitter users.) The tweetup was organized by JPL and limited to a certain number of participants (in this case about 110 people) who were fortunate enough to be chosen randomly to participate in this event. When I was selected I knew I was lucky but I didn't really know how lucky – the tweetup was just fantastic! Why? Primarily because of the people. Everyone involved – organizers, speakers, engineers, scientists, project managers, graphic designers, visualization producers, rover drivers, graphics programmers, social networking communicators, you name it – had an incredible passion and enthusiasm for their job and for the space program in general. We as a society may take the accomplishments of these people for granted from time-to-time but we shouldn't. They accomplish amazing things and we should all be very proud.

The Jet Propulsion Laboratory is currently managing 17 active missions and 9 instruments. The basic format of the tweetup consisted of a series of presentations about current and upcoming missions as well as tours of various facilities at JPL. Specifically, our agenda included:
END_OF_DOCUMENT_TOKEN_TO_BE_REPLACED

I spent most of last week in Big Bear Lake, California at the Society of Astronomical Sciences 30th Annual Symposium on Telescope Science. I had a great time and I learned a lot. Despite it's name, the symposium had relatively little to do with "telescope science" per se and a lot to do with astronomical science.

If you are an astronomer ("amateur" or otherwise) interested in using your skills for scientific study this conference has a lot to recommend it:
END_OF_DOCUMENT_TOKEN_TO_BE_REPLACED

Posted in Events, Pro / Am Collaboration | Leave a comment 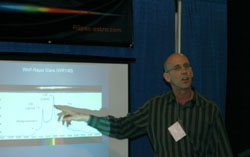 Amateur astronomers frequently spend the majority of their time focused on one of three activities: visual observing, imaging or science. The scientists often specialize in photometry or spectroscopy. At NEAF 2011, I finally got to meet two very influential and important people in the world of amateur spectroscopy: Olivier Thizy of Shelyak Instruments and Tom Field (shown in the image to the left) the creator and developer of the RSpec program. I had interviewed Olivier in August, 2010 but I hadn't interviewed Tom yet. When I got back to San Diego I wrote Tom and asked him if he would be willing to do an interview and I'm happy to say that he graciously agreed. Included below is our email interview.

What functionality is provided by RSpec?
RSpec is a program that allows a beginner or expert to capture and process spectrums of stars and planets. The program makes it easy to convert the rainbow-like smudge of a spectrum to a calibrated, annotated graph. These graphs reveal the composition and other physical properties of the star or planet you're observing. It's really quite exciting to be able to do this easily.
END_OF_DOCUMENT_TOKEN_TO_BE_REPLACED

The UK Royal Astronomical Society National Astronomy Meeting (NAM 2011) was held last week (Sunday April 17, 2011 to Thursday April 21, 2011) in Llandudno, North Wales. I wasn't at the meeting, but it sounds like it was outstanding. Listed below are links to some articles I thought were interesting:

I'm sorry to say that NEAF 2011 is behind us and it's time to start thinking about 2012. I don't know about you, but I really enjoyed looking forward to this year's NEAF and I'm going to miss the anticipation that I've felt everyday for the past couple months. Anyway, before moving on to other things, here are some random thoughts about NEAF 2011 (please feel free to add your own comments below):

Yesterday was cloudy, rainy and cold at NEAF 2011. Today was mostly sunny which was good news because the Solar Star Party was able to proceed as you can see from the image below (remember to click on any image to see a larger version): 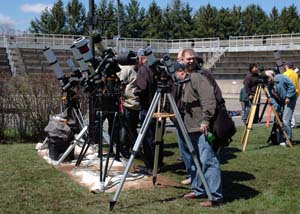 While the Solar Star Party was in full swing outside, the exhibit hall was filled with activity inside. As I mentioned in yesterday's blog posts there are a lot of different types of vendors at NEAF. The following image is good example. This is an 11.5 foot ExploraDome II with an optional bay extension.
END_OF_DOCUMENT_TOKEN_TO_BE_REPLACED

Welcome to Part 2 of Share Astronomy's continuing coverage of NEAF 2011. Please remember that you can click on any image and see a larger version. Our first image shows a 14" Celestron EdgeHD SCT mounted on a Celestron CGEPro mount. 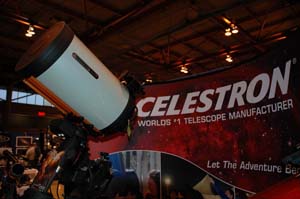 The image below shows a Planewave 24" CDK mounted on an Astro-Physics 3600 GTO GEM also known as "El Capitan" at the Astro-Physics booth. 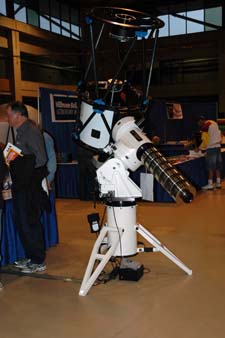 END_OF_DOCUMENT_TOKEN_TO_BE_REPLACED

Hello from NEAF 2011. It's a grey, grim, rainy day outside in Suffern, New York but that's OK. Everyone is having a great time indoors. With approximately 140 astronomy vendors in one location who wouldn't have a good time? This is my first post from NEAF 2011 and like last year, I will be focusing on pictures (no pun intended). Please click on any picture below to see a larger version.

In case you're wondering what this year's show looks like, here's a quick view of part of the exhibit hall: 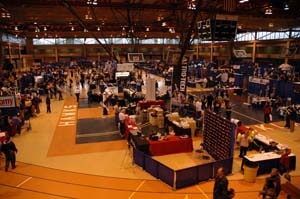 Our first booth stop this year was the Teeter's Telescope booth. This is a 20" f/3.5 scope complete with ServoCat. 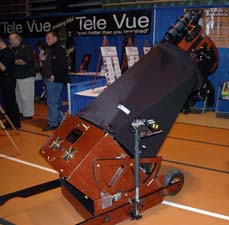 END_OF_DOCUMENT_TOKEN_TO_BE_REPLACED

As I write this, there are only 12 days left until NEAF 2011 (the Northeast Astronomy Forum). As you can expect, people are beginning to get really excited about what is arguably the largest amateur astronomy expo in the world. (NEAF 2011 will be held on April 16th and 17th at Rockland Community College in Suffern, NY.) Recently, it occurred to me that it would be fun to try and find the person who has attended the most NEAF events and do a short interview. So, I submitted a post to the NEAF forum on Cloudy Nights and asked who had been to the most NEAFs. The winner of this informal survey was George Normandin who has attended "at least 10 times". Congratulations George! Our email interview is included below:

Are you located near Rockland Community College in Suffern, NY (the venue for NEAF) or are you traveling a long ways to attend?
I drive, but it's a 3 hour trip one way over mountain roads, plus a stop for breakfast and supper. I amuse myself by cataloging the observed road-kill (2 foxes, 1 bear, 2 skunks, 5 deer, 10 woodchucks, etc). This year I plan on staying over Saturday night to make a two-day event of it. I've done that twice in the past, and it's the best way to do NEAF.
END_OF_DOCUMENT_TOKEN_TO_BE_REPLACED