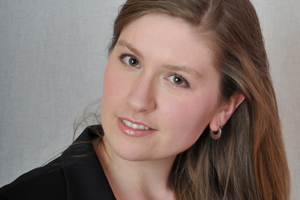 In my blog post on August 18, 2009, I discussed how amateur astronomers could do "real science" by participating in the Galaxy Zoo project. As the Galaxy Zoo web site points out more than 150,000 people have participated in this research effort. One of the most prominent participants is Hanny van Arkel.

Hanny van Arkel is the discoverer of Hanny’s Voorwerp which is Dutch for Hanny’s Object. The blueish object in question appears close to the spiral galaxy IC 2497 in photographs. Its exact nature is unknown but more information can be found here and thousands of other web sites.

Recently Hanny kindly agreed to answer some questions from Share Astronomy. The interview is included below. Thank you Hanny!

How did you originally hear about Galaxy Zoo and citizen science?
Through Queen's guitarist Brian May, who I admire a lot for his music and for what he writes on his website, www.brianmay.com. He mentioned Galaxy Zoo approximately a month after it had started, which is when I signed up.

What motivated you to get involved with Galaxy Zoo?
The fact I could help real scientists without being a scientist myself. Besides that, classifying galaxies is fun to do, as the pictures on www.galaxyzoo.org are beautiful.

You are a music teacher and a citizen scientist. What qualities do you think make a good citizen scientist?
Being interested in science and wanting to help in scientific research. That’s really all it takes; everyone can do this.

You have met many professional astronomers. How do they view your contribution?
They're all very nice and interested in 'my side of the story'. I often hear they're happy to see a young and enthusiastic woman promoting science the way I do – through lectures, events, press activities and my website: www.hannysvoorwerp.com.

Do you think most professional astronomers and other scientists see the value in citizen science?
Yes. From what I understand, getting data isn't very hard anymore with the current technology. Analysing all that information is, which is where 'citizen scientists' can really help.

You are the moderator of the "She is an Astronomer" forum. What is the goal of the SIAA forum?
The She Is An Astronomer project wants to provide information to female professional and amateur astronomers, students, and those interested in the gender equality problem in science. Its forum invites everyone (men too) to talk about this issue and share ideas on how to improve the situation.

The vast majority of amateur and professional astronomers appear to be men. What suggestions do you have for involving more women in astronomy and citizen science?
Join our forum, http://forum.sheisanastronomer.org, read experiences and tips from others and brainstorm along.

You are also a moderator for the Galaxy Zoo forum (in particular the education discussions). What have you learned from your fellow citizen scientists and educators?
The Galaxy Zoo forum is a place where astronomers (who set up the project) and citizen scientists (amateurs) share information about the project, but also about astronomy in general. I did learn a lot from that, which is mostly basic astronomy.

How has the discovery of Hanny's Voorwerp changed your life?
I've met a lot of interesting people and made new friends all over the world, I did a lot of interviews for international media, I give lectures about my discovery, Galaxy Zoo and citizen science through Europe, my name is on all the scientific papers about Hanny’s Voorwerp… So I already got to experience a lot of fun things!

This entry was posted in Interviews, Pro / Am Collaboration. Bookmark the permalink.