I spent last week in New Mexico on vacation – what a fascinating state. For example, did you know that per capita New Mexico has more PhD's than any other U.S. state? I guess this shouldn't be surprising given the fact that Sandia and Los Alamos national laboratories are both located in New Mexico. In addition, New Mexico is home to many astronomical observatories and that probably bumps up the PhD count a notch or two. The Very Large Array, Apache Point Observatory and the National Solar Observatory / Sacramento Peak (Sunspot) are all located in New Mexico.

I visited both the National Solar Observatory / Sacramento Peak (Sunspot) and Apache Point last week and if you are ever in Southern New Mexico I would highly recommend visiting both observatories. They are next door to each other so a visit to both of them is easy. The nearest town is the village of Cloudcroft which is a very attractive and interesting mountain town. The drive to Sunspot is beautiful. 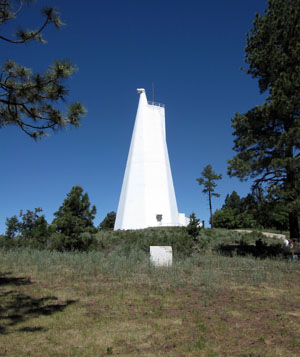 The National Solar Observatory (NSO) has three "Flagship Facilities", one of which is the Dunn Solar Telescope located on Sacramento Peak in Sunspot, New Mexico. There are actually several telescopes at Sunspot but the primary telescope is the Richard B. Dunn Solar Telescope (originally named the Vacuum Tower Telescope) which is shown on the left (you can click on this picture – or any of the others – to see a larger image.). This telescope is really quite unique. As you can see, the observatory – and the telescope – are tall (the building itself rises 136 feet (41.5 m) above ground and descends 228 feet (69.5 m) below ground). Light enters the telescope through a window at the top where it reflects off two 44" mirrors and then travels down a vacuum tube all the way to the bottom where it is reflected off of a 64 inch (163 cm) mirror and returned up the vacuum tube to ground level where it can be directed to various instruments. As I mentioned, the telescope is evacuated (i.e., it is a vacuum). If there was air in the tube it would be heated by the sun and cause distortion of the sun's image. Visitors are allowed into this building. You can see the ground floor laboratory but, as far as I know, visitors are not usually allowed upstairs or downstairs.

The image below shows the main tube of the telescope and what I believe is a tube housing three spectrographs. All of these tubes are evacuated. This image was taken from the observatory room floor. The entire optical system of the telescope – including the observing room floor – is suspended from a ring-shaped container holding 10 tons of mercury. The rotating part of the telescope weighs more than 20 tons. 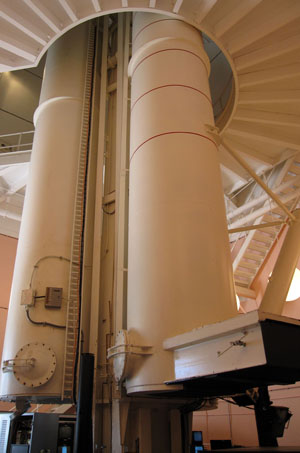 This picture is a close-up view of part of the observing room floor. 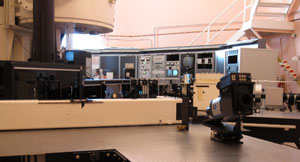 As I mentioned, the National Solar Observatory / Sacramento Peak has several telescopes. The image below shows the Evans Solar Facility which houses two telescopes: a 16" coronagraph and a 12" coelostat. (A coelostat which is pronounced "seelostat" is a device that uses two mirrors to reflect an image of the sun along a path.) Both telescopes can be used simultaneously. The sun's corona (the thin outer atmosphere) is the primary target of the Evans Solar Facility. 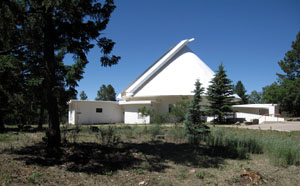 Many of you will probably be more familiar with the Apache Point Observatory than you are with Sunspot even if you don't immediately recognize the name. Apache Point is the home of the Sloan Digital Sky Survey (SDSS) 2.5-meter Telescope. The observatory that houses the 2.5-m telescope is shown below. The telescope is exposed for observations by moving the whole building down a track. (The individual tracks can be seen if you click on this picture and look at the larger image.) 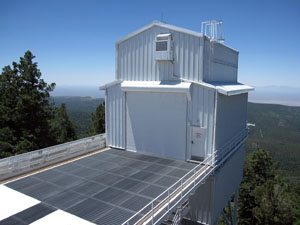 Apache Point Observatory is privately owned and operated by the Astrophysical Research Consortium. Apache Point Observatory currently operates four telescopes. The building housing the SDSS 2.5-m telescope was shown above. The image below shows the observatory buildings for the other three telescopes: the ARC Small Aperature 0.5-m Telescope, the New Mexico State University 1.0-m Telescope and the ARC 3.5-m Telescope. The ARC Small Aperature 0.5-m Telescope was originally used for photometric calibrations on SDSS. Now it is used for general observing and public outreach. The New Mexico State University 1.0-m Telescope is used for instruction and research. The ARC 3.5-m Telescope is used primarily for objects that require many short observations over long periods and targets of opportunity that require a quick response. 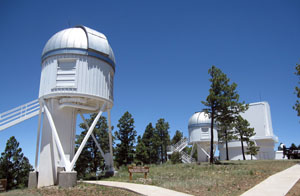 The image below shows a closer view of the observatory building which houses the ARC 3.5-m Telescope. The sides of the building slide to the left and the right respectively to expose the telescope. 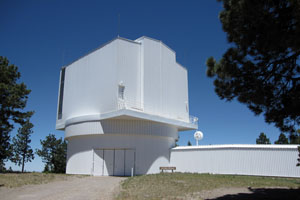 You can visit the NSO Sacramento Peak web site or the Apache Point Observatory web site for more information.

This entry was posted in Astronomy-related Travel, Observatories. Bookmark the permalink.